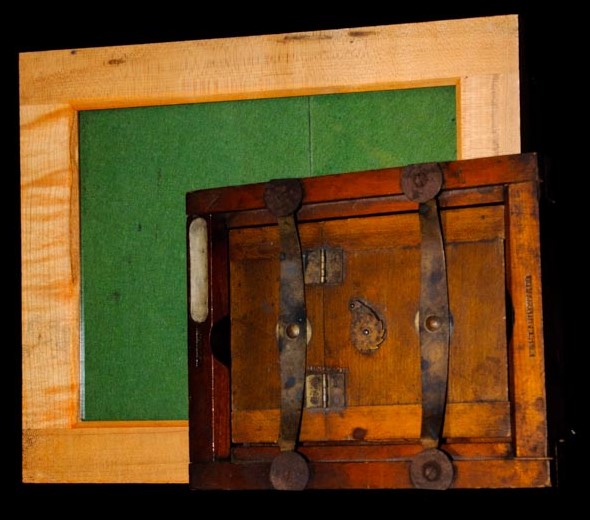 Some of our Followers, know that based upon a few events in 2016 with people stating things such as they didn’t know how to fold a Canvas tent, or with one person insulting me, by stating “nice props” while referring  to my camera’s , I’ve been working on a folder, that explains in details while providing provenance on everything that we use within our camp.

with the information that I’ve been writing, I’ll be adding that info to our website, while allowing me to expanded the information about some of our antiques, that due to their nature, are typically not carried with us to a civil war event.

this is the page  used in the finishing/studio portion of the binder and is specifically about printing.

The concept of forming images on paper using silver halides and the sun lead to some of earliest developments towards taking successful photos. And bringing with it idea of using negative images to effectively reproduce a print. This allowed grater flexibility over the daguerreotype process, which is considered a developed out positive image, which could not be easily reproduced.  In 1841 Henry Fox Talbot introduced the Calotype or talbotype a Developed Out Paper negative and, as we call it fixing which prevents the silver from continually blackening, an issue that Thomas Wedgwood and Nicéphore (Felix) Niépce had encounter in earlier experiments. Henry Fox Talbot was then able to print his negative on paper that had been coated with table salt and silver nitrate, creating what’s simply called Salted Paper, a printing out paper. This printing process was commonly done through the use of a contact printing frame, similar to the two pictured above.  Shorty after, Henry Fox Talbot introduced the Carbon print, while in 1847 Louis Désiré Blanquart-Evrard introduced the Albumen print, which became the most popular form of prints thought the 19th century, as exemplified through stereoviews, cabinet cards and CDV’s.

As techniques of printing advanced, the presentation of the complete photo advanced. And with it creating an almost separate set of professions within the photographic industry. Such as colorist and touchup artist, print artist, artist making frames and cases, separating the photographer, by the Civil War. Studios and producers of photographic supplies, such as E. & H. T. Anthony, hired any number of people who specialized in those aforementioned aspects.

Today, within the photographic industry, there are still specific artist who specialize, in taking the photo, touching it up, printing it, then presenting it. Battle Born Historical Photography, attempts to create the element of a 19th and early 20th century photographic artisans and studio, thus we will often print and mount our own photo’s utilizing different types of paper and techniques forgotten by the digital age.