Working with a lot of the public at different events, with a focus on living history/reenacting. I’ve set myself up more as a 19th-century itinerant photographer.
As part of that I carry a lot of items, that are designed and built to be reasonably historically representative and functional.  My Darkbox or portable darkroom is no-exception.

Historically, there are many different designs to choose from as exemplified in catalogs, photographs and a small handful remaining of historic examples.

Unfortunately, I’m afraid that too many people have watched too much television, leading to the most common assumption that my darkbox is my camera, along with many other questions based upon myth created out of the silver screen.

My Darkbox is simply a wooden box, with a window and some tenting added, that provides a dark area, with limited light, that does not affect the collodion film. a safe-light. and while I have given my dark box a nice finish, which is very Victorian. these items were commercially available or were crafted for the photographer based upon their specifications.

When designing my darkbox, I looked at historical and modern examples. with the basic caveat that it needed to be light enough for me to move and setup by myself, it also needed to have enough working space for a 5×7 sized silver bath, plate holder, and trays.

fortunitly, it’s also big enouph that I can with some careful manipulations work with an 8×10, it is however a tight space. leading to eventually updated to something more portable. but with more space 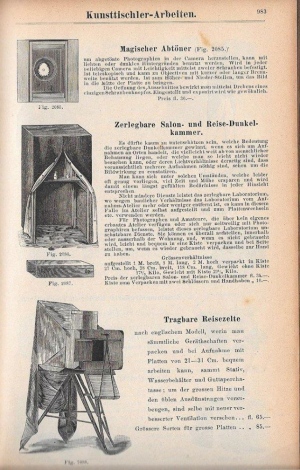 Not being terribly flush in money to invest in purchasing a crafted darkbox, with the stand and tenting. I opted to talk to a local woodworker to craft the box for me.  The basic design was is similar to some of the modern crafted darkboxes, in particular, Steves of Black art Woodcraft who makes wonderful period style cameras, and point of fact is the same person who originally crafted my camera.

The following year of use I crafted the tripod stand. based upon plans from Ty Guillory for his platform tripod.  The tripod stand was a vast improvement making the whole thing more stable as well as being more historically correct.

I suppose, because I often set my darkbox up towards the front of the camp and that it’s on a tripod stand that this also adds to the confusion, but again people seemingly are fascinated by it, wanting to see the inside, take pictures of it, and so on. again to me it’s not particularly special, other than being finished box. that’s been stained a dark color, and painted yellow on the inside, it now proudly displays silver stains all over the inside.

the next question, why is it painted yellow inside. the answer is actually very simple, it’s a bright color that allows us to see more easily while tucked inside, plus collodion film is basically blind to color, again one of those safe colors. additionally, the majority of the wet-plate dark-boxes were also painted yellow on the inside

Finally, I would eventually prefer a cart, allowing me more space along with the ability to be more mobile at events, and I just recently learned who designed and crafted this cart, that was sold to another wet-plate photographer located in the northwest. and have asked him for his basic designs.